Connection
1, You maybe have to buy Video and Audio cable, and S-Video cable to connect the USB Video Capture with your analog video device. You need to buy the Scart Video/Audio adapter if the output of your video source device is Scart type.
2, The following devices can be used as analog video sources:
Video recorder, DVD player, Video camera, Set-top box, Game player, and any device that provides an analog video signal.

If you use a scart interface, please connect equipment following below picture and set the switch to be OUTPUT. 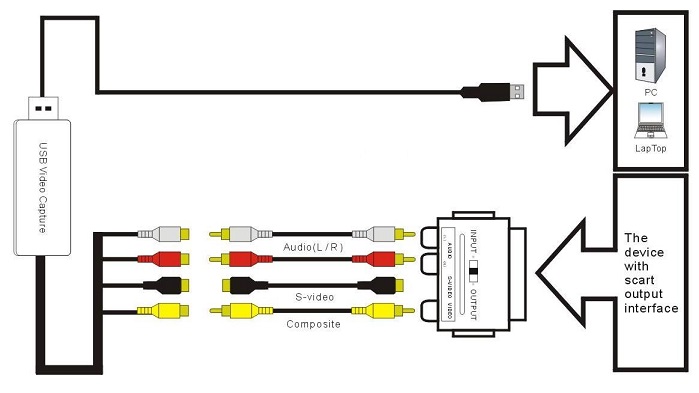 WHITE and BLACK SCREEN when use S-Video connector
S-Video signals are generally connected using 4-pin mini-DIN connectors using a 75 ohm termination impedance. Today, S-Video can be transferred through SCART connections as well. S-Video and RGB are mutually exclusive through SCART, due to the S-Video implementation using the pins allocated for RGB. Most SCART-equipped televisions or VCRs (and almost all of the older ones) do not actually support S-Video, resulting in a black-and-white picture if attempted to use, as only the luminance signal portion is used. Black-and-white picture in itself can also be a sign of incompatible colour encoding, for example NTSC material viewed through a PAL-only device.
I have bought a new scart-composite cable and now everything is working fine.

The above information is provided by Mr. Jeroen Mooijekind, thank him!